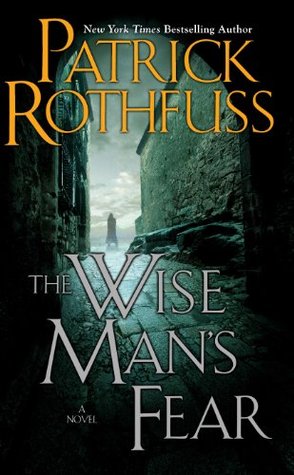 In The Wise Man’s Fear, Kvothe searches for answers, attempting to uncover the truth about the mysterious Amyr, the Chandrian, and the death of his parents. Along the way, Kvothe is put on trial by the legendary Adem mercenaries, forced to reclaim the honor of his family, and travels into the Fae realm. There he meets Felurian, the faerie woman no man can resist, and who no man has ever survived…until Kvothe.

Now, Kvothe takes his first steps on the path of the hero and learns how difficult life can be when a man becomes a legend in his own time

The day has arrived when I have finally managed to finish this hunk of a book.  These thousand pages are packed full with adventure, high fantasy and the most intriguing kind of magic (we all love a bit of that!)

To avoid confusion read my review of The Name of the Wind so I don’t have to repeat things because that’s bleugh.

Interestingly, the story follows the day to day life of our protagonist Kvothe where he goes to school or kills a bunch of bandits or falls in love and it is so mundane yet so interesting because our narrator has a certain way with words that make everything seem so put together. Faraway lands are discovered in this sequel where we leave the halls of The University and explore realms (sometimes magical).

However, there is also a deep emotion setting in that indicates that this story inevitably does not have a happy ending. Book readers might know what I’m talking about and it’s still sad.

Very rarely if ever do I come across sequels that have managed to sort of stay on par with the prequel. I mean to say that Patrick Rothfus’ writing is so consistent that I feel like the game wasn’t stepped up or down in this book but kept the same. This is such an admirable thing because it must be so difficult maintaining that level he set with the first book in this series.

I highly enjoyed the dialogue written throughout this book as there were some rather deep discussions about morality and politics and the like. Believe me, it was a lot to take in but I could tell that the narrator didn’t expect me to understand those complicated discussions as it wasn’t going to affect my understanding of the story.

I know people get intimidated by fantasy because of the writing style but Rothfus has this flowing, not confusing dialogue that just captivates the reader.

I believe our narrator more than anything revolves his story around the people he meets and the lessons they teach him. Kvothe, our narrator is witty, tempered and humorous which make him realistic. He certainly matured throughout the novel in many ways by making mistakes or brash decisions and I truly felt like he was just another sixteen year old boy you know.

There were a LOT of new characters introduced most only staying for a period of time then leaving but I enjoyed most everyone’s presence as they bought that little something to the story and revealed a different side to Kvothe and a different perspective of him.

People who’ve read the book especially! There is a point in the story where it is revealed that Kvothe might be twisting details while telling his story? This made me wonder whether he might be an unreliable narrator and I’m not sure I like that. But hey, tweaking things a bit never hurt anybody.

As for the third book, it is yet to be released but I’m pumped to see the end to it all and I’m curious as to whether the story will pick up from present day where Kvothe is narrating his story or?

You may or may not notice but this is my last post of 2014 and I’m so grateful for everything my blog has become this year and it’s because of everyone who follows or likes or views so thank you and have a lovely year ahead!