Title: Thanks for the Trouble 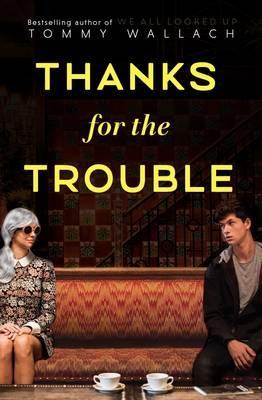 Parker Santé hasn’t spoken a word in five years. While his classmates plan for bright futures, he skips school to hang out in hotels, killing time by watching the guests. But when he meets a silver-haired girl named Zelda Toth, a girl who claims to be quite a bit older than she looks, he’ll discover there just might be a few things left worth living for.

From the celebrated author of We All Looked Up comes a unique story of first and last loves.

Okay so I absolutely whizzed through this one, it was short but it was also adventurous and exhilarating.

You know when you’re just stuck in a rut and you need a refreshing book to get you out of that rut? Thanks for the Trouble did that for me. But it also made me think a lot deeper into things.

Having met Tommy now I could pick out his inspirations behind writing this novel the way he did (It was inspired by films surprise surprise). But I could also understand his ideas about teenage love and time and life.

Written in the form of a college application Thanks for the Trouble takes you on this journey condensed into one weekend where there is diversity through our handicapped protagonist, I mean having a protagonist who couldn’t speak out into the wide world must’ve been really challenging but was done really well. There’s also Zelda who is so insightful and she makes you question the darkest parts of yourself, about moving on and Zelda’s just the kind of person who’d walk into your house and give you a wake up call with the question what are you doing with your life?

I could go on and on about the characters but the story itself is so good you know? I mean the entire universe of adolescent mishaps is captured in this novel, at times i felt this novel’s writing echoed John Green or Stephen Cbosky’s novels. We have the whole Parker coming of age by confronting his fears about his father’s death and his mother’s inability to move on and his ideas about love.

The ending. As with all the Tommy Wallach novels I’ve read (a total of two) the ending remains ambiguous. And I really like the message he’s trying to send about high school relationships and, I’m starting to feel like I appreciate realistic albeit cynical endings to the typical boy ends up with girl endings.

The May meeting for the YA Circle over at Dymocks Adelaide featured a very special guest.

I remember hearing at the very first YA Circle meeting that Tommy was coming and freaking out which was followed by weird looks in my direction but let’s move on.

I was first introduced to Tommy when I joined the bandwagon back in 2014 to promote his first YA novel We All Looked Up which I absolutely loved! he’s recently released Thanks for the Trouble which I’m currently in the process of reading and am loving it so far

Tommy is this really outgoing and funny guy whose brutal honesty might have you in tears by the end of the night (I warned you). But seriously, he’s also really perceptive and has interesting opinions about everything from Manic Pixie Dream Girl to the existence of the universe. And I feel like that’s really reflected in his writing, which is incredible because now as I’m reading Thanks for the Trouble it’s like I’m getting to know the author in the process.

Tommy draws a lot of inspiration for his books from films and it was really interesting to see where the inspiration for both his books came from, like We All Looked Up, the idea of an asteroid approaching Earth came from the movie Melancholia.

He was also very honest about what it’s like being a writer. According to Tommy writing is not fun, as in yeah the glory of having a novel out there and going on tours is amazing but the actual task of sitting down and writing is infuriating, I’d have to completely agree given I’m subject to staring at a blank word document every time I go to write an essay for English.

The night evolved into Tommy performing a song from WALU and lots of laughs and banter all around. Of course when it came to meeting him we ended up talking about Lord of Rings and ARCs and typos. It was also lovely to see Gen from Simon & Schuster.

A massive thank you goes to the staff at Dymocks Adelaide for making this possible and of course to Tommy for coming down to Australia!

Here are some fun facts because I never end on cheesy notes:

Title: We All Looked Up

Big thanks to Simon & Schuster Australia!

Four high school seniors put their hopes, hearts, and humanity on the line as an asteroid hurtles toward Earth in this contemporary novel.They always say that high school is the best time of your life.Peter, the star basketball player at his school, is worried “they” might actually be right. Meanwhile Eliza can’t wait to escape Seattle—and her reputation—and perfect-on-paper Anita wonders if admission to Princeton is worth the price of abandoning her real dreams. Andy, for his part, doesn’t understand all the fuss about college and career—the future can wait.

Or can it? Because it turns out the future is hurtling through space with the potential to wipe out life on Earth. As these four seniors—along with the rest of the planet—wait to see what damage an asteroid will cause, they must abandon all thoughts of the future and decide how they’re going to spend what remains of the present.

Tommy Wallach is a Brooklyn-based writer and musician. His first novel, We All Looked Up, will be published by

Simon and Schuster in April 2015. His work has appeared in many nice magazines, such as McSweeney’s, Tin House, and Wired. He has released an EP with Decca Records, and will be independently putting out an LP in Spring 2014. He also makes music videos, including one that was exhibited at the Guggenheim Museum. You should buy him dinner.

Drop everything now and go read this book. Seriously. I’m going to control my excitement and keep this review short and sweet because my end of the world bucket list is about to happen.

Firstly, the writing. Oh my. It was so philosophical and that’s what got me so engaged in the book initially. There was also the whole mystery about the asteroid and whether it would crash or not which just had me turning the pages. I was very impressed by how much  We All Looked Up reminded me of The Fifth Wave which is another amazing Post-Apocalyptic novel. If you enjoyed The Fifth Wave you’re going to want to read this.

This book had such an honest representation of what would happen if the world was actually about to end. No everyone would not be unicorns and rainbows. It would be chaos and anarchy. Nothing was toned down and the book stayed real till the end.

Four POVs, all in third person but somehow it all made sense,  it wasn’t confusing or messy it was harmonic. I mean genius or genius? I liked how basically every character in the book was somehow intertwined with another. The character development from Anita taking hold of her life to Andy becoming mature to Peter realizing the things that actually mattered. It was brilliant

Overall, We All Looked Up isn’t so much about an asteroid crashing into Earth as it is about what people do with the time they have left where there is no time left. the relationships they make and the risks they end up taking and that I believe was the true driving force of the book.

Hypothetically if the world were ending and we were all about to die the following are the things I would do:

1. Steal all the candy

Okay I wasn’t the only kid that imagined strolling into a candy shop and looting the place down was I?

2. Gather all my loved ones in a house and tell each one how much I love them (look at me getting all cheesy!)

3. Hopefully by the time the world is ending I would’ve traveled a fair bit so I’d love to re visit my favourite places and appreciate them for one last time

4. Stock up on my favourite foods

Um i can’t spend my last days on Earth without pizza or pickled jalapenos or chippy chips can I?

5. Sleep under the stars (cuz you’re only gonna get so many starry nights)

6. Meet George.R.R.Martin and suffocate the ending of Game of Thrones out of him (desperate times call for desperate measures)

7. Bury all my books (because the last thing I’d want is someone to burn them or even worse they deteriorate alone on my shelf!)

8. Ride around town in a shopping cart . Let’s be real that won’t turn out well..

But it’s the end of the world!