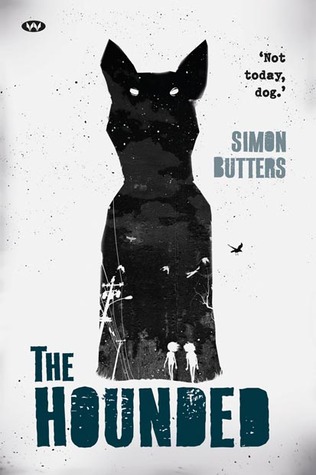 On his fifteenth birthday, Monty is at rock bottom. Ignored by his parents, bullied at school, and with a brain that’s prone to going walkabout, he’s all by himself.

Until he meets the black dog for the first time.

It’s just like any other dog, except that only Monty can see it. And it talks. And Monty’s not sure whether it’s a friend – or a foe.

The black dog gets him talking to pretty, popular Eliza Robertson for the first time. It takes him to places he’s never been.

Eventually it will take Monty, and the people around him, to the very edge.

The Hounded is a novel that explicitly tackles contemporary social issues and makes it relevant by narrating these issues from the perspective of an everyday Australian teenager’s perspective.

I was most impressed by the way the novel was written. Being the author’s first published novel I believe Simon did a very solid job of creating an engaging and fluent narrative. Monty, the protagonist, has this unique voice that is consistent throughout the whole novel.

As for the plot I believe it was an interesting story however, at times it felt like the author was trying to pack in too much at once. I mean it’s amazing to write so openly about suicide and mental illness and cyber bullying but it felt like each of these issues was never completely in the spotlight because there was so much other stuff going on as well. There were also a lot of circumstantial events in the novel as in there wasn’t any build up to that event, they just appeared and I don’t know how I feel about that. At the end of the day, it was an honest story, there was no over dramatization or anything.

The Dog was a very interesting metaphor. I’ve rarely come across creative pieces of work where there is such a solid metaphor for mental illness or suicide. The Dog makes you think and I like that. A lot of the things in the novel were left open to interpretation so as not to overload the reader but also so the reader had something to ponder over.