Title: One Flew Over the Cuckoo’s Nest 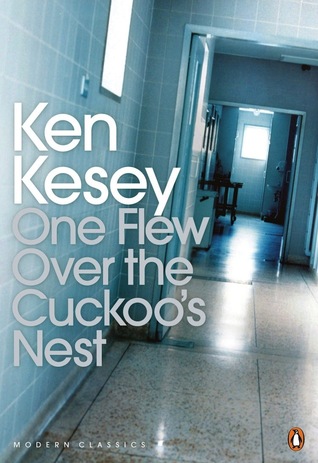 Tyrannical Nurse Ratched rules her ward in an Oregon State mental hospital with a strict and unbending routine, unopposed by her patients, who remain cowed by mind-numbing medication and the threat of electric shock therapy. But her regime is disrupted by the arrival of McMurphy – the swaggering, fun-loving trickster with a devilish grin who resolves to oppose her rules on behalf of his fellow inmates. His struggle is seen through the eyes of Chief Bromden, a seemingly mute half-Indian patient who understands McMurphy’s heroic attempt to do battle with the powers that keep them imprisoned. Ken Kesey’s extraordinary first novel is an exuberant, ribald and devastatingly honest portrayal of the boundaries between sanity and madness

As for any book that makes it to the “required reading list” at school, One Flew over the Cuckoo’s Nest had a lot of depth and provocative themes that I’m really excited to write an essay about. But this is a review, okay right, here we go.

To being with the novel is draggy as it is setting the scene in the environment of an asylum, the quirky characters and the antagonist are introduced, with help from great illustrations of course. Then comes our protagonist, McMurphy and it picks up. The novel is exciting and provides a thrill for majority of the story and slows right down at the end. But it leaves you feeling satisfied, everything happens as it is supposed to.

The characters are all very distinct and the fact that their quirkiness and traits are established from the start makes it easy to distinguish one character’s voice from another. Mcmurphy’s voice and personality are very strong and you can’t help but love the guy. There is something so satisfactory about the rebel winning in a game. As for the Chief who’s POV the novel is recited from has a more passive voice of an observer, but I love how his past is explored while we know little to nothing about McMurphy’s past.

The novel is thoroughly researched I can tell, possibly due to the fact that the author worked in a mental asylum. It paints a very bleak and graphic picture of an asylum what with its shock treatments and the attitude of the staff. Deep down the novel is obviously about control and rebellion and power but we’ll leave that to my analytical essay for school

The approach of the holidays equals more reading time equals more books. Here are some books I bought recently

Yellow by Megan Jacobson- Thank you to Penguin Teen Australia for this ARC!

Upon recommendation by Sarah.J.Maas and Penguin Teen Australia I picked up these books at Supanova and the lovely author signed them for me too!

I plan on getting more books during this month but this is it for now! Super excited for all the books mentioned above