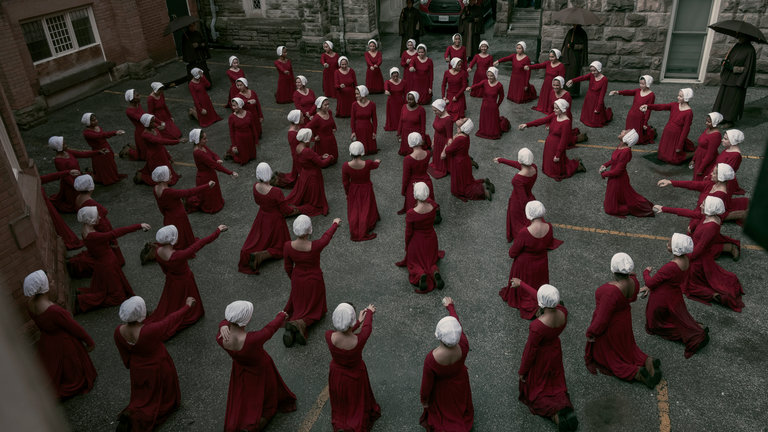 The trailer starts off with everyone looking quite distraught and slowly transitions into scenes of rebellion.

It looks like we’re at the brink of a war. Unlike the last season which was all about the handmaid’s this time we’re seeing the ripple effect, the families that were torn apart, people who just want their home back.

We see people travelling on horseback, people being held at gun point and show cases of love. All pointing to a season filled with emotion and shock

The soundtrack is absolutely divine too! it sends goosebumps down your spine and the lyrics can be broken down to mean a million things

The Handmaid’s Tale returns April 25 which is only 22 days away woo!

Offred is a Handmaid in the Republic of Gilead. She may leave the home of the Commander and his wife once a day to walk to food markets whose signs are now pictures instead of words because women are no longer allowed to read. She must lie on her back once a month and pray that the Commander makes her pregnant, because in an age of declining births, Offred and the other Handmaids are valued only if their ovaries are viable. Offred can remember the years before, when she lived and made love with her husband, Luke; when she played with and protected her daughter; when she had a job, money of her own, and access to knowledge. But all of that is gone now

This book is really hard to talk about. It’s just so difficult to explain the world and the story, it’s one of those books you just have to read to understand. Here goes my attempt at convincing you to pick this book up right now.

The Republic of Gilead formerly known as The United States is a dystopian society where basically women have no rights or freedom. The don’t even have an identity, you’re stripped of your name and given these weird names like Offred which are devoid of meaning or feeling. In the beginning it was difficult to imagine such an oppressive society where you have no control, where words like love are banned. It’s definitely the kind of book that grows on you as you continue reading and you’ll find that by the end you’ll find the most horrific things “normal” in this context.

The scene was set nicely with the introduction of key aspects and characters but for quite a while there was an air of mystery about this society, I mean how did they come about? how did they gain such power and maintain control? These are all questions that are answered obviously as the story continues between the past and the present, surprisingly I didn’t get confused by the constant switching.

Oh and did I mention? there were some serious 1984 (the book) vibes going on in this book, I literally had Deja Vu at some points in the story and of course this book like 1984 has taken over my brain for the past few days.

Offred is the protagonist of this story and I believe what’s so freakishly good about her character is that she is so …normal? I mean she’s just another thirty something woman who had a man and a child and is now in the wrong circumstances. The decisions she makes are so real, I guess we’d all like to believe we would act as heroes or martyrs if our rights were stolen and we were oppressed but the truth is the majority of us would just do what Offred did, go along with is because resistance requires serious strength.

Along with Offred’s compliance the book also explores resistance among her kind, I mean there’s her best friend Moira who is an absolute rebel and flicks this government and their oppression. I think we all secretly hope we were Rebel Moira.

The writing is the hardest to explain. It is unlike anything I have ever read before. It is blunt. It is heavy. It is amazing. Atwood manages to paint such a good picture of this world with her feminist rants and such. Nothing is ever glorified, Atwood just says it like it is. Although I do feel like there wasn’t much emotion involved in the writing but it is quite a unique style of writing so it seems obvious there wouldn’t be sappy scenes.

But there would be these moments when Atwood would write these beautiful, poetic phrases and I’m just here like ‘melts’

The Handmaid’s Tale is quite a serious and heavy book exploring important topics that women and men need to read about. I like the fact that the ending was open to interpretation because that just strengthens my withdrawal symptoms with this book. Seriously, go read it.