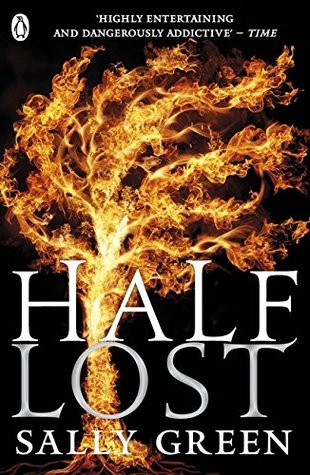 Nathan Byrn is running again. The Alliance of Free Witches has been all but destroyed. Scattered and demoralized, constantly pursued by the Council’s Hunters, only a bold new strategy can save the rebels from total defeat. They need the missing half of Gabriel’s amulet – an ancient artifact with the power to render its bearer invincible in battle.

But the amulet’s guardian – the reclusive and awesomely powerful witch Ledger – has her own agenda. To win her trust, Nathan must travel to America and persuade her to give him the amulet. Combined with his own Gifts, the amulet might just be enough turn the tide for the Alliance and end the bloody civil war between Black and White witches once and for all…

The epic conclusion to one of my all time favourite Half Bad trilogy. I have to say this one definitely went out with a bang but not in the way you’re thinking, it’s bitter sweet, it leaves its mark on you and isn’t that what all great books do?

Half Lost was set apart from the two prequels in the sense that it didn’t focus so much on the action and violence and war. However, it focused more on Nathan’s character development and the psychological repercussions of war and going through what he has gone through.

The book is heavily focused on Nathan but the characters around him are seen to play a crucial role in forming him into the person he is.

I did find the writing is a bit different from the prequels, it’s more continuous and more like Nathan’s internal monologue while the prequels are more focused on narrating the actions. While I did sense the book lacked direction at times, everything came together in the end and it was beautiful and it tore me apart and yes, Nathan found himself.