At the start of the year I made a post about my bookish resolutions for 2015. Needless to say they soon become lost among all the book reviews and life I was caught up in. It would only be fair to look back and see how I did.

I’m proud to say I achieved this goal very well and some of my favourite books from 2015 have been debut and/or stand alone. These include All The Bright Places, Am I normal Yet? I was Here etc.

Resolution #2: Give Books to charity

Only the other day I donated 2 bags full of books I wasn’t interested in keeping or was never going to read. I hope they go to someone who’ll enjoy them more than I did!

I believe I somewhat stuck to this goal. I did blog regularly except sometimes I would take a few unannounced hiatus’ because life.

Hmm does winning at life count? Haha I didn’t exactly win anything but I’m proud of all that I have accomplished so that makes up for it I guess

Resolution #6: Get 200 followers on this blog

We’re getting closer to this goal, not to mention my email followers have been growing at a much greater rate. Numbers aside, I believe I’ve acquired some very loyal followers who regularly like and comment so much love to you guys ❤

I was giving some thought to this the other day. I don’t believe I’m ready yet, I mean I’m lacking good reasons to go Self-Hosted. What would be some benefits of self-hosting?

This was something I found was lacking this year. Perhaps this could be my resolution for 2016?

My 2016 Resolutions post will be up tomorrow if anyone wants to have a read after being hungover from New Year’s haha. I hope you guys have had an incredible 2015, I know I have and wishing you all the best for the coming year, 2016!!

It’s that time of the year again where we look back and pay homage to all the books that left me feeling awed, curled up in a ball crying or wondering what next I would do with my life since I’d finished the book.

NOTE: The book titles link to my reviews if you’re interested

All The Bright Places by Jennifer Niven

The epic conclusion to The Lunar Chronicles series. It was 800 pages of every emotion I could ever imagine from pride to joy to hatred.

Heir of Fire by Sarah.J.Maas

This book was, with lack of a better word to describe it, on fire. There was so much adrenaline and character development.

The Sacred Lies of Minnow Bly by Stephanie Oakes

Another unique book that explored issues such as blind faith and painted such a brutal world in all its goriness.

An Ember in The Ashes by Sabaa Tahir

An epic fantasy read that was exotic, smart and a great start to what I believe will be an epic series.

Another unique book. Gosh 2015 was a year of trying new things wasn’t it. I highly enjoyed the concept of a book within a book and the supernatural elements were very cool.

The Handmaid’s Tale by Margarot Atwood

Okay I need to stop saying this. But this book was also very unique. It evokes thinking in the reader about issues such as feminism and oppression and women’s place in society.

Am I normal Yet? by Holly Bourne

A recent read this also tackled mental illness but in a more honest, down to Earth manner. The protagonist has one of the most distinct and memorable voices that I’ve ever heard.

The Sword of Summer by Rick Riordan

Of course it won’t be a top 10 without Uncle Rick making an appearance. Back with the same old witty humour, education on mythology and unforgettable characters The Sword of Summer is the beginning of one epicly funny series about Vikings.

Queen of Shadows by Sarah.J.Maas

Another epic book in the Throne of Glass series with all its plot twists, unique characters and fantastic elements.

What are some of your favourite reads of 2015?

This year I’ve decided to participate in this meme where we list the top five things in accordance to the topic. If you wanna join the group feel free to check out their Goodreads group and Join in!

Without further ado, here are the series I aspire to begin in 2015.

Did someone say fiary tale retellings? heck yes! well it’s not exactly a retelling but rather about this descendant of Alice from Alice in Wonderland and I think she’s going back to wonderland? idk sounds cool. And since I just snatched the first book for a bargain I cannot wait to dive in. The covers look absolutely gorgeous and the writing in the first book is PURPLE oh God I need to contain myself!

Pushing The Limits by Katie McGarry

The Unbecoming of Mara Dyer by Michelle Hodkin

Another one I’ve been meaning to start but never did. The cover of the third book seems so gripping that I HAVE to get to these! Also since it’s about mental health I definitely wanna read it sooner rather than later.

Just One Day by Gayle Forman 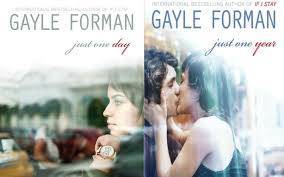 If you haven’t been following this blog for long you wouldn’t know but I am a HUGE Gayle Forman fanatic. I mean if reading If I stay, Where She Went and watching the If I stay movie wasn’t enough I also received an early copy of her book I was Here which comes out January 27th! But yeah I can never get enough of Gayle Forman

Magnus Chase and the Gods of Asgad by Rick Riordan

I need my yearly dose of Rick Riordan and since Percy Jackson has forever said goodbye to me I have nothing to do but start this new series. It’s about Vikings okay, I don’t know anything about them but I’m sure I’ll be an expert after reading this series.

That concludes my top 5 series I want to start and hopefully I’ll get to all of them! Check out other people’s top 5 series here and let me know yours in the comments!

We’ve managed to complete another orbit around the sun which means it’s time to set some goals which potentially may or may not to be completed throughout this year.

I’ve created a not so impressive doodle of my blog/book related goals for this year and as I complete each of these goals I’m going to be colouring in a part of my doodle so by the end of the year we shall have a nice colourful picture. Do you like it? I like it, it’s quirky.

1. Read Debut and stand alone novels: In 2014 I got so caught up in staying up to date with my series that I forgot to discover new books and authors. This year will be different.

2. Give books to charity: If any of you like myself watch Booktube you would know there is this trend where you unhaul books and give them to charity or something and I think it’s about time I do something good for this world.

3. Blog at least twice a week: I would like to post a review at least once a week and some other bookish things on other days, I’m confident I can blog twice at least. What two days would you prefer? comment!

4. Build a network: Doing Top 10 of 2014 and some Read-a-thons I got to discover so many new blogs and I love chatting with people on Twitter. In 2015 I really want to integrate myself in this book community and experience awesome things!

5. Win Something: I did NaNoWriMo this year and WON yes so I want to win NaNoWriMo again or win something because it is a confidence booster okay

6. Get 200 followers on this blog: The numbers have never been a big deal to me but I would like to meet new people and discover their blogs and yeah.

7. Consider self-hosting: With school I’m not sure I’ll be able to make such a big step just yet but I want to look into it.

This concludes my aspirations for this blog and my reading in 2015. What are some of your resolutions? Remember you have a 365 paged blank book so make it a good one.

About that time of the year when I start thinking about my reading plans for next year. I’ve compiled a list of new releases I’m looking forward to up to June 2015 mostly because most of the titles in late 2015 do not have confirmed dates.

Here are my most anticipated titles of early 2015! Click on the pictures which will take you to the books’ respective Goodreads links.

There is a buzz of excitement already in the book community and the book hasn’t even released yet. A promising contemporary read dealing with mental health issues which seems like such a progressing step in the YA community because acknowledging these issues provides support to young people and lets them know they’re not alone. Really hyped to read this and I can already tell it won’t disappoint.

Another promising contemporary, I don’t much read contemporary but it seems like 2015 is gonna be that year. The story line seems really mysterious and intriguing. You all know how much I love Gayle Forman’s emotion packed writing!

I have to have my yearly dose of Marissa Meyer and this seems like it will help me pass the time until Winter, The final installment in the Lunar Chronicles releases!

Ahh The date seems so close yet so far, I am literally numb from thinking that this is it. The last book in the Bloodlines series. It’s gonna be bittersweet.

I cannot even! I absolutely fell in love with the fantasy and adventure during Half Bad, the prequel so it’s no surprise that I’m going manic crazy waiting for this book.

Another contemporary! I’m especially interested to read this book because the main character is homosexual and I wanna see more of these young adult themes incorporated in YA because books can be so motivational.

This came as a bit of a surprise. For those who’ve read The Selection you might know what I’m talking about. The tables are turned, the princess is looking for a price it’s gonna be interesting. Also THE COVER!

This is also one of those popularly talked about books of 2015 and I’m curious to see what the fuss is about and I don’t wanna miss out the party so why not read it! It’s got road trips and boys and friendships and sounds fun.

I’m interested to see how many of the aforementioned titles I’ll actually read ahah. Hopefully all but we’ll see. What books/ things are you looking forward to in 2015?