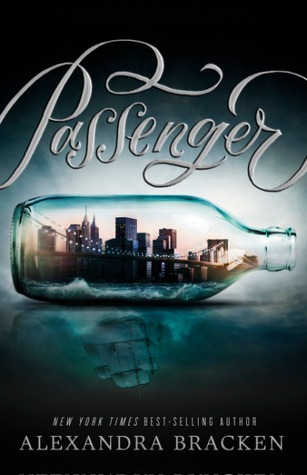 Etta Spencer is a violin prodigy. When tragedy strikes and a mysterious power tied closely to her musical abilities manifests, Etta is pulled back through time to 1776 in the midst of a fierce sea battle.

Her capture was orchestrated by the Ironwoods, the most powerful family in the Colonies. Nicholas Carter, handsome, young, prize master of a privateering ship, has been charged with retrieving and delivering her to the family – unharmed.

Etta learns her fate is entwined with an object of untold value from her past. Ironwood is desperate to secure his future, but Etta must find it first in order to return home. Embarking on a perilous journey across centuries and continents, piecing together clues left behind from a mysterious traveller, the true nature of the object and Ironwood’s dangerous game, could mean the end for Nicholas and Etta …

As part of the newly founded YA Circle book club, our read for this month was Passenger. I’d heard a LOT of hype about this book when it first released and to be honest I didn’t bother to pick it up until I was kind of forced to…

While Passenger isn’t your epic Game of Thrones fantasy, it sure does leave you with a mark. Based around time-travel, family feuds and love, it explores modern conflicts around the world along with the devastating events of the past, leaving the reader with a heightened sense of diversity and awareness.

One element the novel completely excels at is the diversity:  not only are different cities during different eras explored, there is also racial discrimination, wars, religion and current crisis. In doing so the book reminds us of the privileges we take for granted living in our modern world where women can vote and where the colour of your skin doesn’t prevent you from marrying someone for example.

The romance in Passenger is beautifully described. The depth of Nicholas and Etta’s feelings for each other is just crafted so delicately, I often found myself completely engaged and holding my breath. In saying that, I found the book was very plot driven and didn’t focus immensely on character development apart from developing the romance. Peppered with history and cultural lessons, Bracken takes you on a whirlwind of adventure across land and sea.

With an action packed plot, breathtaking romance and power hungry brutes Passenger forms one of the best fantasy/historical reads of 2016