Instead of doing a traditional movie review I decided to spice it up so if you haven’t already, here are five reason why you NEED to go watch Mockingjay. And if you’ve already watched it then go watch it again and again.

5. Jennifer Lawrence has an amazing voice

During Mockingjay she sings “Hanging Tree” and I am so obsessed with that song mostly because of her voice! Apparently she started crying when she was told she had to sing during the Hunger Games movies. Which is bullocks because Jennifer is literally queen. She not only has a singing career but her acting as Katniss is so raw and powerful.

4. Everyone loves an underdog

I mean don’t you ever wonder why all of Panem chooses to be influenced by some sixteen year old girl? because she’s an underdog, she’s one of the unfortunate majority who under the circumstances uses her voice and kicks some butt. She stands up for the poor and rubs it in to narcissistic assholes like President Snow.We all love a good kick butt female protagonist don’t we? 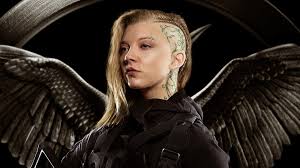 To be honest Catching Fire still remains my favourite film to date but I have to say Mockingjay Part one was quite satisfying. I mean I haven’t read the book in three years but I can tell they covered the major plot points which made it a good adaptation.

The acting was brilliant especially by President Snow, ah I hate him so much and Peeta oh my God, I’m not gonna say anymore because that’s spoiler territory but Peeta was incredible. Also, I have like a massive girl crush on Natalie Dormer, she is SO COOL. And obviously Katniss never fails to get your blood flowing ay

2. You don’t wanna miss out

Let’s be real Hunger Games is topping the pop culture charts right now. You don’t wanna be that one oddity who hasn’t watched it so get on it! But seriously, Part One has got me so pumped for part two especially because, as the book readers would know, there is so much more to come cough weddings and deaths cough. But I do feel like they could have covered some more things from the book since now I feel like Part Two is going to be heck long.

1. The Hunger Games is a metaphor for our world

I’m not exactly sure if metaphor is the correct term but I’m gonna call it that anyway.  Panem is ruled by the Capitol who suppresses the other districts into agreeing. In Mockingjay especially we see traces of our own world, the revolutions, the propaganda, the unnecessary killings of innocents, all for a very petty cause at the end of the day, It is quite eye opening.

Are you convinced yet? You better have bought your ticket to watch Mockingjay. But yeah, I was satisfied with the movie and I cannot believe there’s only what? a year left till the finale. It has been a long journey, super excited to see how it all concludes.

As always, feel free to share your thoughts in the comments!