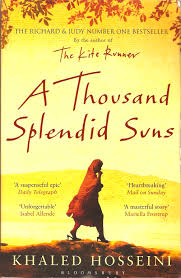 Propelled by the same superb instinct for storytelling that made The Kite Runner a beloved classic, A Thousand Splendid Suns is at once an incredible chronicle of thirty years of Afghan history and a deeply moving story of family, friendship, faith, and the salvation to be found in love.

Born a generation apart and with very different ideas about love and family, Mariam and Laila are two women brought jarringly together by war, by loss and by fate. As they endure the ever escalating dangers around them—in their home as well as in the streets of Kabul—they come to form a bond that makes them both sisters and mother-daughter to each other, and that will ultimately alter the course not just of their own lives but of the next generation. With heart-wrenching power and suspense, Hosseini shows how a woman’s love for her family can move her to shocking and heroic acts of self-sacrifice, and that in the end it is love, or even the memory of love, that is often the key to survival.

A stunning accomplishment, A Thousand Splendid Suns is a haunting, heartbreaking, compelling story of an unforgiving time, an unlikely friendship, and an indestructible love

It is long overdue that I do a review. I apologize in advance if I have lost my flare but here we go.

A Thousand Splendid Suns was one of the most powerful books I’ve read in a long while. It spans decades telling a tale of suffering and heroism especially in women and as a strong believer in women’s rights this book had me cheering on for the females at every turn.

Mariam and Laila our central characters are so alike yet so different.

Mariam’s tale is one of coming of age. She is bought up believing she is an illegitimate child worthy of nothing but she learns that she isn’t defined by her illegitimacy and that she is worthy of affection. This is much thanks to her bond with Laila which tends to empower Mariam to take some bold steps later in the story. I don’t know what to think of Mariam since she wasn’t as present in the story in comparison to Laila. But the sacrifice she made was pretty heroic.

*This picture isn’t mine but was found on Google Images.

Onto Laila. I absolutely loved Laila. She is this strong independent woman and I saw a lot of myself in her. Sure she had a comfortable life to begin with but the tragedy that hits her doesn’t break her but makes her stronger. Her endurance and defiance towards Rasheed (Mariam and Laila’s husband) made me want to kiss her feet.

I understand Mariam and Laila’s bond is supposed to be an integral part of the story but I’m fuzzy on how it came about. They find themselves with a common enemy under the same circumstances and join forces. Is that it? Their love for each other and Laila’s children was so powerful, I was surprised at their ability to be so loving in the dire situation they were in.

Okay, What Rasheed put Mariam and Laila is not justifiable but people who have read the book, wouldn’t you agree that he’s been through shit? and maybe the social values have shaped him into believing that men should control their wives or whatever.

Kahlid Hosseini does an outstanding job of creating flawed realistic characters. His extensive use of foreshadowing in the novel had me intrigued and engaged from the get go. The vivid picture he paints of war and violence was so terrifying but it is the reality.

The title A Thousand Splendid Suns according to me is about the hidden beauty of Afghanistan and it uncovers the lives women lead behind veils in the country.

I was satisfied. Characters that needed to succeed succeeded. Loose ends were tied nicely and Laila’s ultimate connection to Mariam at the end was so heartfelt and emotional.

Kahled Hosseini has succeeded in portraying how war shapes our lives and the decisions we make. The people that we meet through war and how a common struggle can form a bond so deep and filled with love it is everlasting.