Following is my October in all things books!

Let’s just begin by saying I’m a complete and utter idiot. For some odd reason I was under the impression that September has 31 days. Like what? right? You might be wondering why this matters so much, well because now it’s messed up my blog schedule ugh.

While we’re on the topic of schedules. I am going to be posting at least 2 times per week on this blog! yay. Expect at least one review.

Here’s the fun bit: The books I’m reading in October ( plan on reading)

1. Blood Of Olympus by Rick Riordon

The final book in the Percy Jackson and the Heroes of Olympus series has been top on my tbr since last year. I can’t believe it’s nearly that time of the year again and this time it’s going to be the last. I cannot even explain my excitement but it’s bittersweet since I’m going to miss these characters who are like friends to me. “sobs” 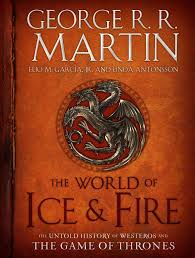 That’s a mouthful of writers ay? This isn’t a novel but a compilation of the history of the Seven Kingdoms from A song Of Ice and Fire series. If you have no idea what I’m talking about then just Google it, no regrets involved. But yeah I’m really excited for this book especially cuz the illustrations look so amazing.

This is the third book in the Raven Cycle series. I believe not many people know about this series. Basically it’s about these private school boys and this gypsy girl called Blue and it involves Welsh Kings and folklore and MAGIC! so yeah pretty intriguing, i highly recommend. I whizzed through the last book so the same is expected from this one

4. The Name of the Wind by Patrick Rothfus

This one has been sitting on my shelf collecting dust since..July? heck that’s a long time. So I better pick it up. Since I’m obsessed with fantasy cuz of Game of Thrones I decided to pick this up since many people have said lovely things about this book. It involves wizards, i mean do i even need to elaborate?

This isn’t a book duh, but I’m still anticipating it since it’s related to the book. Rumour has it that the ending has been changed I mean that get’s me fired up. heck yes. Expect movie reviews (wink, wink)

What do you plan on reading/doing in October? Are there any cool bookish things going on? let me know in the comments. All commenters get FREE cookies (imaginary of course)